I started fishing bass tournaments in 2009. But because of scheduling and/or tournament locations, I’ve never had the opportunity to fish an FLW EverStart Series tournament.  The EverStart Series consist of five divisions — Central, Northern, Southeastern, Texas and Western — with four events per division.  The events feature a field of up to 150 pros and 150 co-anglers. The full field will compete on days one and two, then the top 10 pros and co-anglers advance to the final day of competition, where the winner will be determined by the heaviest three-day cumulative weight.

This year I made a conscious effort to try to fish at least one EverStart Series event.  After looking over the 2013 schedule, I noticed the Texas Division of the EverStart Series would be on Lake Texoma April 18 – 20.  Since Lake Texoma is only 70 miles from where I live,  I figured this was my best opportunity.

Like most tournament anglers, I am a competitive person.  When you have a competitive nature, you are always looking for challenges or challengers.  Like the old saying goes “To be the best, you have to beat the best”.  I have always wanted to test my fishing skills against the “pros”, to see how I would perform.  While registering for the EverStart event on Lake Texoma, I had to decide whether to fish as a boater (pro) or as a co-boater (co-angler).  For those unfamiliar, the boater or pro fishes from the front of the boat (usually his or her boat), and the co-angler or co-boater fishes from the back of the pro’s boat.  This is not a team format.  The pro is fishing against the other pros, and the co-angler is fishing against the other co-anglers.

For this tournament, I made the decision to fish as a co-angler.  Now I know what you’re thinking…why fish as a co-angler instead of as a pro, if you really wanted to match your skills against the upper escelon of bass fishermen?  My decision was based on two factors: 1) I have never fished Lake Texoma before and 2) I would not have any time to pre-fish the lake.  Just based on those factors, the choice was clear.

Costs were another consideration.  Since I do not yet have a paying sponsor, I am solely responsible for my entry fees and travel expenses.  Entry fees for EverStart Series events are $1000 for pros and $400 for co-anglers.  Although I am competitive, I am not a fool!  It was clear to me that the best option to maximize my opportunity would be to go as a co-angler.  As a co-angler, I could still see how well I fished against top competition, and depending on the pro I was paired with, I could learn some things too.

After attending the pre-tournament meeting Wednesday night, and getting paired up with my day-one pro Johnny Lewallen, I went back to my hotel room to begin preparing my gear for the tournament.  While preparing my gear, I was watching the local weather report on TV.  Every bass tournament angler understands what a big role weather changes can play on tournament day.  And sure enough, after a week of 80 degree weather, a cold front was moving in bringing rain, very high winds and extremely cold temperatures.  I was thinking “That’s just great”!!

And of course, the morning of day-one was wet, cold, very windy and completely miserable. I thought there was a possibility the tournament director would postpone day-one because of the awful conditions.  Call it wishful thinking, because I cannot stand fishing when it’s cold.  Unfortunately he did not postpone it, so day one was a go.  I must say it was the worst day physically I have ever had on the water!  My hands were so cold and numb, I could hardly muster the strength to push down the thumb bar on my reels!  Due to the high winds, the water was extremely rough!  The boat ride to and from our fishing spots was unbelievable!  My pro’s boat ended up suffering quite a bit of damage as a result.  When we hear stories about the back problems and surgeries many pro anglers endure, I now understand why.  After many years of putting your body through that type of abuse, eventually it catches up with you.  Needless to say, I was very happy when the day was over!

After day-one, I found myself in 25th place on the co-angler side with three bass weighing 8.3lbs.  I caught all my keepers on a Shakey Head worm.  I used a 7” PowerTeam Lures Finicky Tickler straight tail worm, on a 1/8 oz. Owner Shakey Ultra Jighead.  Believe it or not, I was very happy with my weight.  Especially since there were a lot of co-anglers who did not catch anything.  At least I put myself in position to make the top 10 cut with a good day-two. 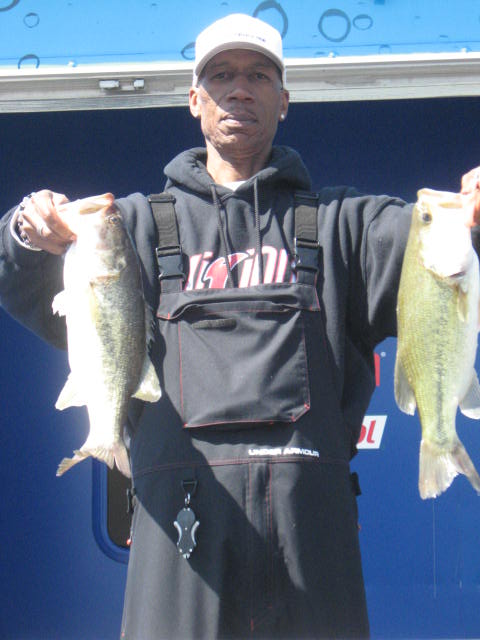 After the weigh-in, I gathered my gear, thanked my boater and began to look forward to day-two.  As I loaded up my gear to head back to the hotel, I received a text message.  The text was from FLW Outdoors.  The text consisted of my day-two information such as my pro’s name and phone number, our boat number, flight number, take-off and check-in times, etc.  As I read the text, the one thing that stood out to me was the name of the pro I was paired up with.  I could not believe it!  It said my day-two pairing was with Bassmaster Classic Champion and Bassmaster Angler of the Year Denny Brauer!  I thought to myself…”JACKPOT”!!

The next thing I knew, I was on the phone with the living legend himself, discussing the time and place to meet on day-two.  I was very excited!  Not just because I felt this pairing gave me a great chance for a good day-two, but because it’s not often one gets to spend the day fishing with and learning from an angler with the pedigree of Denny Brauer.

On the morning of day-two, I met Denny at the agreed upon location.  We shook hands, exchanged pleasantries, and began to launch his Ranger Boat.  After watching the Bassmasters Elite Series on TV for years, it felt surreal to find myself fishing alongside one of the all time greats!

Over time, we all have heard negative stories about how egotistical and unapproachable some of these guys can be.  Based on what we hear about someone, we tend to develop preconceived opinions…opinions that may not be the most flattering.  Denny Brauer completely dispelled all of that for me!  He could not have been less egotistical or more approachable!  One of the first things he said to me was “Just let me know if you need anything”.  This man is one of the top 5 bass anglers ever!  So for him to be that unassuming and kind, says all you need to know about him and his character.  He was truly a gentleman, and a great ambassador for the sport! 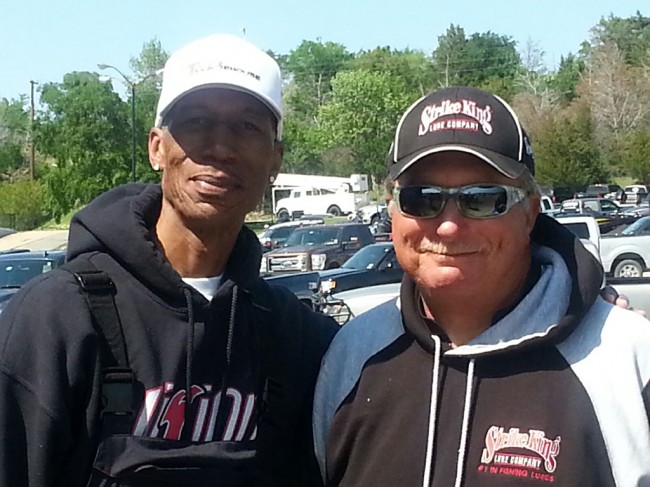 Anyone who knows Denny Brauer, knows he is a master at flipping.  He made his bones in this sport flipping! That is how he fished on day-one, and day-two would not be any different.  We fished shallow water areas most of the day, around rocky shorelines and boat docks.  Fishing behind a great angler like Denny can be challenging.  For example, if he thinks there’s a fish sitting on a piece of structure, he will pick that structure apart until he catches it!

With that in mind, I knew I could not employ the same techniques he used.  I had to do something different.  So if he was flipping a jig, then I would toss a Shaky Head worm…again, something different.  I actually surprised Denny when I caught a fish off a boat dock he had just fished.  He asked me “Where did you just catch that fish”?  I told him, I threw my bait a couple of feet over from where he had just fished, because I thought there might be a fish there, and maybe it just didn’t want to move far enough to eat his bait.  Now when a pro like Denny Brauer compliments your reasoning by saying “You’re a good angler”, it gives you a huge confidence boost!

The weather on day-two was much better!  Although it was still a bit windy, it was not as cold as day- one.  Denny and I found we have some things in common.  Neither one of us likes to fish when it’s windy or when it’s cold!  However, we made the best of it.  We caught a lot of fish throughout the day, but getting those keeper bites proved to be a struggle!

By the end of day-two, Denny had managed to catch a five bass limit, but I was only able to manage three bass…again.  All my keepers came on the same bait as day-one…the Shakey Head worm.  My day- two weight was 8.2lbs.  I finished the tournament with a total weight of 16.5lbs, and in 17th place overall.  I finished only one pound out of 15th place and a paycheck, and only four pounds out of 10th place and a chance to fish on championship day.  One or two more keeper bites would have given me a shot! I wish I could have performed better, but for my first FLW EverStart tournament experience and have it be on a lake I had never seen before, a 17th place is not too shabby!  Oh yeah..and fishing with the great Denny Brauer wasn’t bad either! 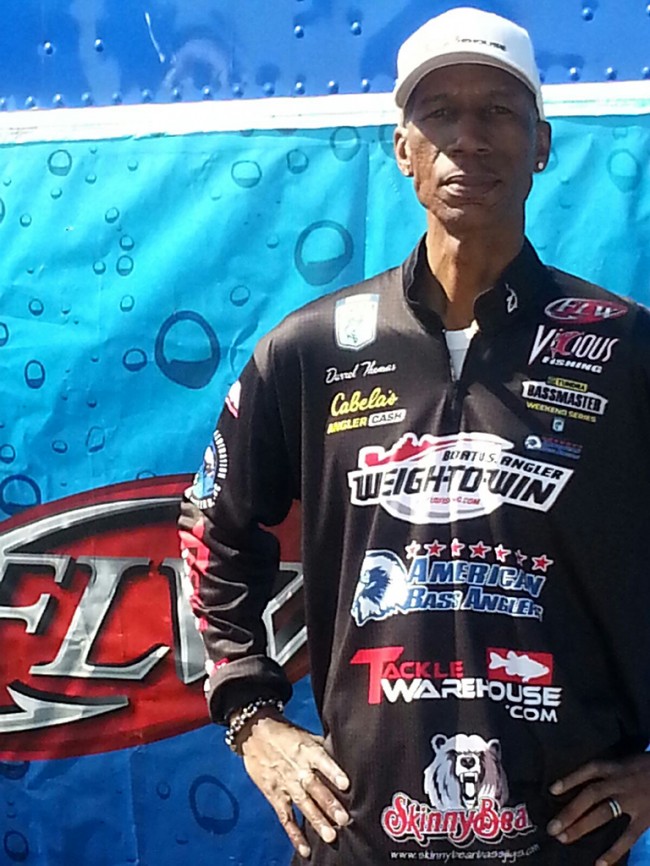