Don’t laugh…this is a legitimate question.  Why?  How?  The average price for a new tournament-ready bass boat out the door is between $60,000 – $80,000.  The most expensive bass boat on the market right now sells for over $100,000.  You heard me correctly, that is not a typo…over $100K!  I did not say it was the best bass boat (that is subjective), but it is the most expensive.  In a lot of communities across the country, you can buy a house for that price or less!  The difference is, the big difference is…a house usually appreciates in value.  But once you tow that big money boat off the lot, the value depreciates by at least a third.  We have not even factored in the price of the tow vehicle needed to pull a 20’ – 22’ bass boat and trailer.  Don’t forget, each of those vehicles will need about $100 worth of gas per outing.  And if you want to fish tournaments, don’t forget to factor in those pesky entry fees!

And what about the thousands of dollars spent on rods, reels, baits, etc.?  Yes…I said thousands!  Gone are the days of using two or three rods.  Today’s tournament bass angler has at least one rod for every technique, with the most expensive rods costing as much as $500 or more.  You will also need reels to go on those rods.  And of course you can’t just put a cheap $80 reel on a $500 rod, right?   Of course not!  The tackle manufacturers know this is our mindset…actually they count on it!  Some reels have also skyrocketed out of the stratosphere, into the high hundreds of dollars.  And what about the baits?  We can’t forget about the baits, right?  And not just any baits will do.  We’ve been conditioned to believe that we cannot catch bass unless we have the most expensive swimbaits (some over $100 each), or the most expensive jerkbaits (some over $25 each), etc.  When all is said and done, you’ll be well into the six figures.  WOW…just WOW!! 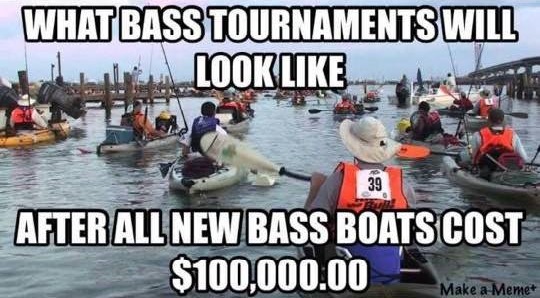 Ladies and Gentlemen…we as anglers have fallen victim to one of the most aggressive and successful marketing campaigns in history!  I referred to us as “victims” but I think a better term would be “suckers”.  That’s because a victim is usually attacked and harmed due to no fault of their own.  That is not the case when it comes to competitive bass fishing.  What we are experiencing in the fishing industry is our own fault…we did this to ourselves.  We as consumers have allowed these outrageous prices to perpetuate and penetrate our sport to the point of being UN-affordable for most.  We have been “suckered”!  Do you remember the classic song “Once in a Lifetime” by The Talking Heads?  The song deals with the futility of not being happy with the things you have.  Each line begins with lead singer David Byrne saying…”You may ask yourself”, then going on to mention a variety of capitalistic ideals, that are indicative of what our society views as signs of living a successful life.  To borrow from that premise, you may ask yourself…”Is all this really necessary just to fish?”  You may ask yourself…”Do I really need to spend six figures to be able to fish tournaments?”  The answer is NO!  Of course not! 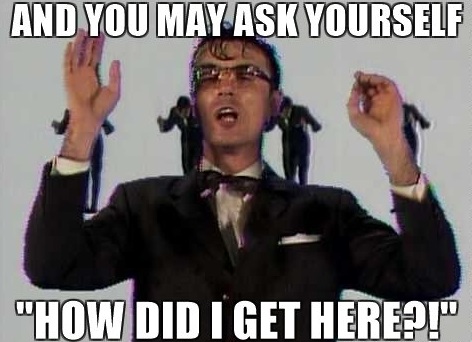 Take me for example.  I have a 2000 Charger 395TF 20’ Bass Boat w/a 200HP Yamaha VMAX Outboard.  I bought this rig in 2005 on EBay.  This boat is in great shape, and it has served me exceptionally well without breaking the bank.  I have won several tournaments fishing out of this rig, and multiple Top 10 finishes. 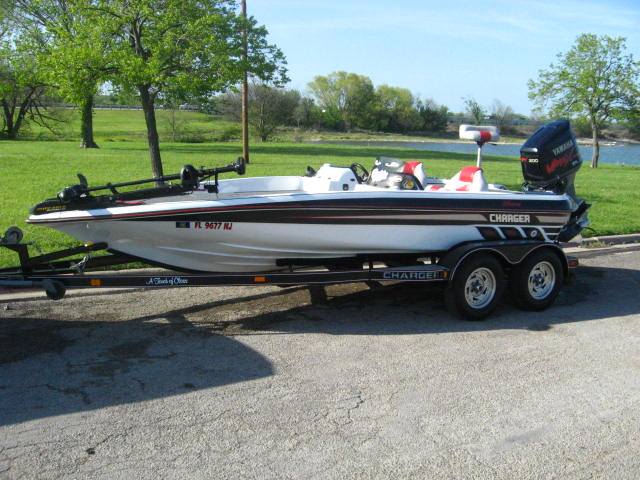 I’m not the only hardcore tournament angler fishing out of an older boat.

Ron Howe is the founder of RB Bass, and one of the most respected figures on the Northern California tournament scene.  Ron’s resume includes the 2016 Best Bass Tournaments Trail Championship, the 2017 Best Bass Tournaments Trail Angler of the Year title (CA Delta Region), and multiple Top 10 finishes.  He fishes out of a 2001 Skeeter ZX250 w/a 225 HP Yamaha VMAX outboard. 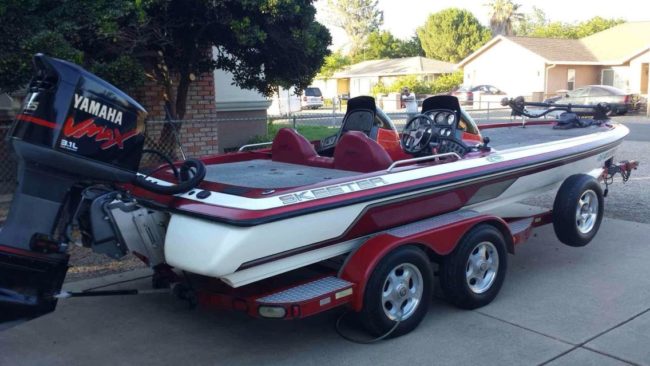 Matter of fact…besides myself and Ron Howe, the RB Bass Pro Staff has several other successful members who are running older rigs: 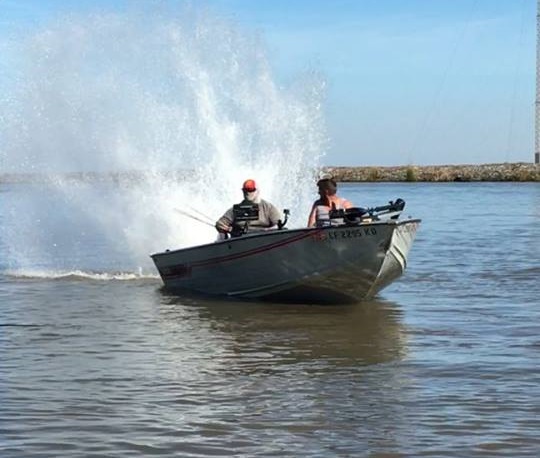 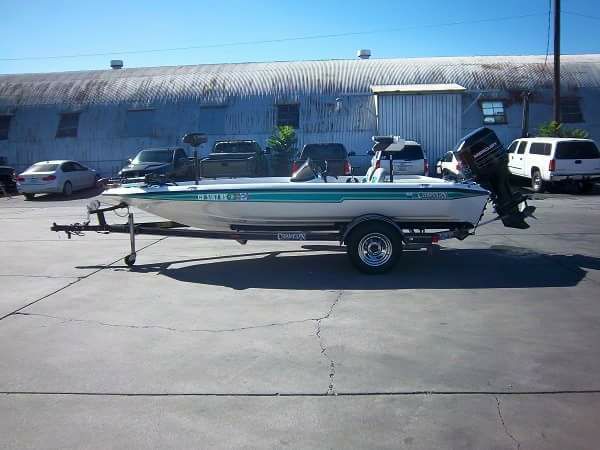 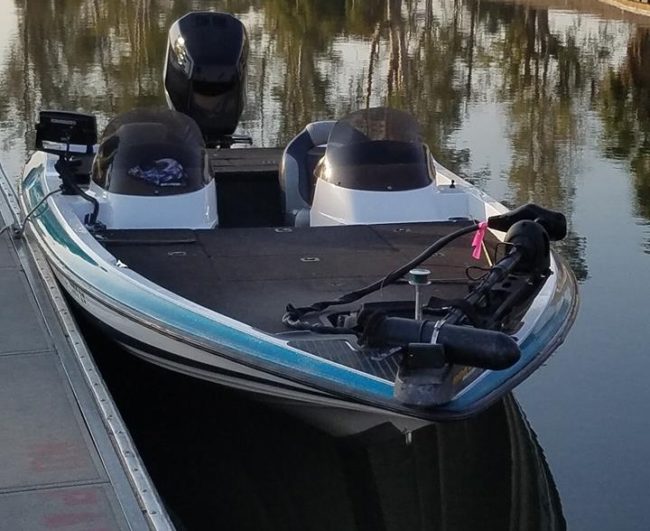 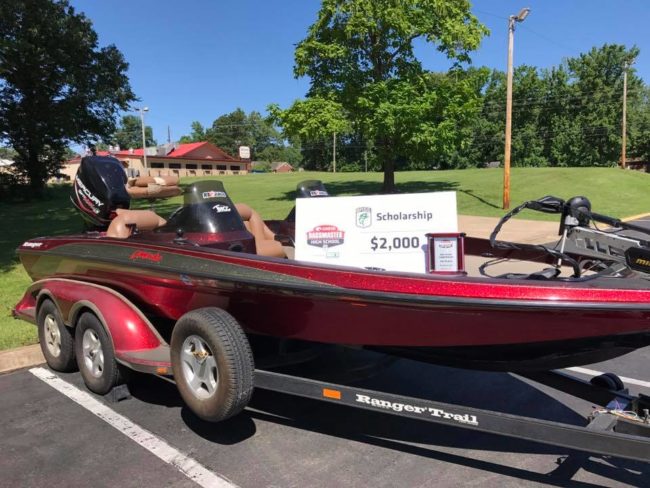 Last but not least is Josh Parris.  Josh not only has the oldest boat of the bunch (A 1984 Skeeter Starfire w/a 175HP Mercury Outboard), but he is clearly the most accomplished.  Josh has won back to back Future Pro Tour Angler of the Year Awards (2016 & 2017), and countless other Top 10 finishes in a variety of tournament trails across California. 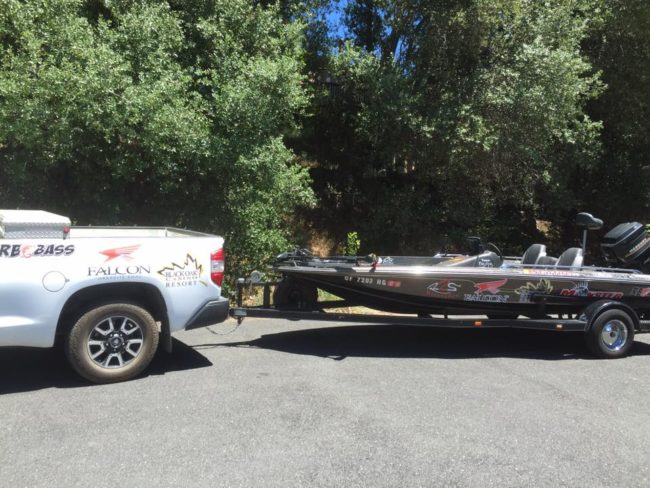 So what does all this mean?  What does all this tell us?  Well…it should tell us that our thinking is skewed.  It should tell us that our mindsets have been altered.  We have allowed ourselves to be brainwashed into thinking that, unless we go out and spend tens to hundreds of thousands of dollars on our boats and equipment that we cannot effectively and successfully compete against those that do.  That lie has been exposed to say the least.  For the few examples I have provided, there are hundreds more.  There’s no reason, no need for an angler to put him or herself in debt, trying to “Keep up with the Joneses” on the water.

Instead of investing all that money into a rig, why don’t you invest in improving your skills as an angler?  You cannot improve your skills unless you’re spending time on the water, and you cannot spend time on the water if you’re busy trying to come up with financing for that high priced rig.

Worrying about your finances can kill your concentration and desire when you’re competing.  Instead of focusing on the next bite, your mind is occupied with worry on how you’re going to make that next boat payment, that next tow vehicle payment, that next mortgage or rent payment, etc., etc.   If you don’t believe me, just ask any of the many anglers who have left the major tours due to finance-related stress.  This is a fact!

Don’t get me wrong, I would love to have a new boat & trailer package.  I’m sure most of us would.  But is it realistic right now?  Is it within my budget right now?  For most of us, it is not.  So instead of stressing over it, why not invest in a good used rig that fits your needs and is within your budget?

I would also suggest that you put the best electronics you can afford on that boat, and invest in quality equipment (rods & reels) that will last you for many seasons.  But even with that, you won’t need to sacrifice quality for price.  There are many rod and reel choices on the market for $100 or less, that are high quality and high performance.  Do your research.  We work hard for our money, so it’s time we start being smarter with how it’s spent.

Personally…I would much rather see more anglers on the water competing and enjoying this great sport, than to see our sport become relegated to a select few who are lucky enough to afford it!

Peace out and tight lines!